Billy Jean and You

Billy Jean And You 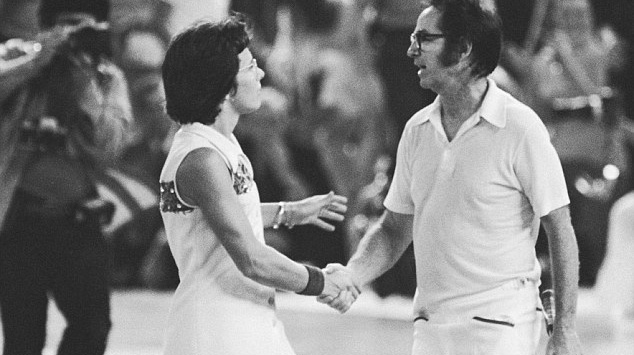 Every so often an exceptionally capable woman has to prove her worth by competing
against a clown. That’s one of the durable truisms of “Battle of the Sexes,” a glib,
enjoyable fictionalization of the 1973 exhibition tennis match between Billie Jean
King and Bobby Riggs.

Over the next few months a lot of people are going to catch-up on the story of Billie Jean King and Bobby Riggs. Battle of the Sexes was just released to theaters Friday to great reviews – for the film and its two main stars, Emma Stone and Steve Carell.

Most people know that in 1973 the top ranked women’s tennis player in the world took on a 55 year old former Wimbledon men’s champion, Bobby Riggs. Ninety million people worldwide watched The Battle of the Sexes, over 30,000 saw it live in the Astrodome – still the largest tennis crowd in U.S. history.

Billie Jean, of course, won all three sets and the match. and took the $100,000 winner-take-all prize. Great story but the match is neither the beginning nor the end of it.

Billie Jean King elevated tennis to professional status in the late 1960’s. Before King’s inititives, the U.S. Open, Wimbledon and the French Open were amateur events where players were paid under the table with a wink. There was no real prize money and there was very little financial incentive to be a full-time tennis player.

King was instrumental in making the sport professional with venues like Wimbledon paying real purses to players. There was only one problem through, King quickly found that the tournaments were going to pay the men much – much – more than the women.

She tried to address it through the Tennis Association but its leadership was all men and most of them had little to no regard for women’s tennis. She got nowhere. So, she started her own tour for women, the Virginia Slims Women’s tour. The top nine women players in the world all joined. In 1973 it became the Women’s Tennis Association … that was also the year that Wimbledon offered equal pay to men and women.

Billie Jean King won Wimbledon in 1973. Despite being goaded, bullied, and insulted she had no intention of playing a match against a 55 year old huckster bent on proving that women’s tennis ‘was a joke.’ But, after Booby destroyed Margret Court on National TV in ‘the Mother’s Day Massacre’ she felt she had no choice.

She felt that not only was the legitimacy of women’s tennis at stake but so was that of the newly passed Title IX. She accepted – but only on the condition that the network not use the regular tennis commentator, Jack Kramer, as he was virulently anti-women’s tennis and that they play by men’s rules, best out of 5 sets. The networks only agreed after she threatened to walk away from the match.

After she won in straight sets, King said, “I thought it would set us back 50 years if I didn’t win that match. It would ruin the women’s [tennis] tour and affect all women’s self-esteem. To beat a 55-year-old guy was no thrill for me. The thrill was exposing a lot of new people to tennis.”

She did that and more, as the state of women’s tennis and Title IX today attest.